The Last Few Days Nov 6-8 and Beyond

We spent the day at Sick Kids on Sunday, including our daughter.  The nurse that day was the same nurse who was there the very first day Kyle was born and brought over from Mount Sinai.  She arranged to have Natasha be able to be let in to see Kyle since she wasn't officially allowed to on the PICU floor since she was under 12.  I'm very thankful she did this. 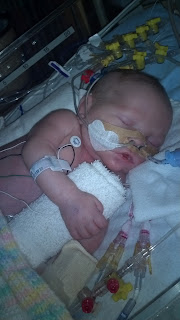 This was the last day that he was responsive at all...he would still grip your finger if you put it into his hand.

They did neurological tests on Monday and Tuesday.  MRI, ECG, and a special type of ECG where they put goggles on and flash lights, do hearing testing as well as physical testing and all of them showed absolutely no response to stimuli of any form.  We made the decision to let him go, and spent time with him as a family for a while before releasing him from the meds and breathing tube. He was 15 days old.

It probably sounds strange, but the fact that the tests showed complete instead of partial damage made it easier to let him go, since we didn't have to make a choice in any form, the choice was already made for us.

It is extremely frustrating to us and to the doctors that they were able to get the metabolic condition under control only to have the E. Coli infection take over to such a terrible extent.

We came home late Tuesday night (Nov 8), and made visitation/cermony arrangements today for Saturday evening. We then travelled north to Sudbury to have him buried next to his brother Colin who died from the metabolic genetic condition at 3 days old 8 years ago.  It is also the same graveyard where my two brothers who also died from OTC, the same genetic disorder, were buried.

We are exhausted, and sad, but overwhelmed by the tremendous amount of support we have received from all around us.  It's hard for people to hear that a baby has died...especially when this is the second time we have gone through it.  I don't know why us, but despite the grief and loss and pain and exhaustion, we are feeling overall ok right now, mostly because of how much support we have had.

The doctors commented how impressed they were with our advocacy for Kyle right from the beginning during the pregnancy.  Because of some of the information I had gathered and presented regarding emerging research for the condition at the beginning of this process, Sick Kids will be starting a new experimental treatment study to help babies with the same type of condition as well as other urea cycle disorders in the future. Kyle was not physically big enough for this treatment study, but I am proud that because of him it will be started at Sick Kids to help others if needed.

The study is experimental, and a little controversial, but we were willing to participate if we didn't have a liver donor or cadaver liver lined up fairly quickly due to the severity of the illness in our particular mutation of OTC.  It had been arranged for us to be flown to Yale to be in the study if needed.  One of our big concerns was travelling to the States.  As we had said to our doctors in Toronto, "Being in Toronto is hard enough, but at least our family and friends can come visit.  To go to the States means noone will be able to visit (due to finances), and we aren't familiar with the doctors down there."

In case you are interested in this study, here is a link, and if you want other information, let me know, as I do have other links I could share as well.

We were also told that Toronto General was overwhelmed with the number of applications they had for living donor for liver.  I know of six who applied, and another six who we told to told off because they only test one person at a time and they were still going through the applications they had.  Hopefully this has raised awareness of the need for organ donations and will help other families waiting.

There is so much more to write, but I have difficulty putting my feelings into words in general, and particularly in this situation.

Tell me your thoughts. I love to hear from readers. Say hi! :)

Popular posts from this blog

Participating in Research Study at NIH for Urea Cycle Disorders

November 06, 2013
Note: i will add in some pictures later. My phone hasn't done a Google back up of the pictures I've taken yet. Friday, November 8th would be our son Kyles second birthday. While being aggressively treated for Ornithine Transcarbamylase Deficiency (OTC Deficiency), a urea cycle disorder, with the hopes of having him obtaining a liver transplant, he acquired an E Coli infection at the hospital. The infection was not caught in time, and in doing the treatment for the OTC, dialysis was performed, which in turn spread the infection throughout the entire body. Last year at this time, we had a follow up appointment at the hospital. I'm hopeful that in my participating, new things will be learned that will help future generations. This year, at this same time, I am at the National Institute of Health (NIH), in the United States, participating as a research subject in a study called MINI. It stands for Metabolism, Infection and Immunity in Inborn Errors of Metabolism. They had s
Read more

June 30, 2011
The fetal echo cardiogram on Tuesday at Sick Kids went fine.  No problems at all.  So that's good news.  The medical fellow who did the ultrasound was 16 weeks pregnant with twins...can you imagine how hard it would be for her to have to tell people that things aren't good with the heart while she's pregnant herself?  A tough spot to be in. So we're glad that went well, because if it hadn't, we're pretty sure that the possibility of using any treatment options/end results liver transplant would have been eliminated. On another note, I've been looking for blogs from anyone who has documented their time in treating a baby with OTC.  I havn't managed to find any.  I have found a few blogs that talk about treating their children with other urea cycle disorders (of which OTC - ornithine transcarbamylase deficiency is one of six urea cycle disorders, and the most common of the six).  Even though it's not exactly the same (but similar) I found Katie w
Read more